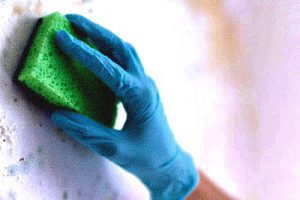 Mould can be found in so many places around the house – mainly the bathroom, basement, laundry rooms and more. Basically any place where the levels of humidity are high. What is more, it can grow on furniture, mattresses, cupboards and appliances. There are different types of mould and depending on which one you got, cleaning can be super easy or not so much.

If you are having a large area that is mouldy, you may need to call a professional cleaning company to take care of it. They can come test it and remove it in a safe way which will prevent it from coming back soon after. It is important to turn to a professional in such a situation because there are a number of dangerous types of mould that should be specially treated, in order to not cause a threat.

For smaller areas that grow mould you can easily find treatment yourself. There are plenty of products that will help you get rid of mould, however you should make sure to follow some safety guidelines. Some of them are very powerful and will rid you of mould in no time. However, whenever you want to find a safer, more natural way – go for vinegar! Distilled white vinegar and cleaning vinegar are safe and less toxic for both the environment and humans. Whenever picking vinegar to use, make sure the acetic acid levels are higher than 4.2%. Distilled white vinegar, for example, contains around 5 percent acetic acid and 95 percent water.

Vinegar is good for removing mould but is slow acting. It is not going to remove all mould right away and some of the discolouration and stains left behind might stay and require additional scrubbing.

What is important to remember is that mould should be treated as soon as it is discovered. Small colonies can easily turn into large ones and take over a whole wall. When removed on time, mould would stay away for longer.

In the following lines, we will show you exactly how to use vinegar against mould.

Vinegar is great for removing mould from appliances such as refrigerators, dishwashers and washing machines. What is more, it can be used on clothes and accessories as well. When treating such items, take them outside and brush off the mould there to prevent spores from spreading around your house. Check the labels to see what the recommended way of washing is. Use the highest allowed temperature and add vinegar to your washing machine load. If the stain is still there, use oxygen bleach (when possible) to remove any remains.

If you have any leather goods that are mouldy, rub them with vinegar. The mould will fall off but you should remember touse leather cleaner and polish after.

Here are some ways to reduce the amount of mould in your house.